Invast Hotels reports a record hotel transaction volume over the first 6 months of 2017 in the Netherlands.

Each year Invast Hotels publishes an overview of hotel transactions in the Netherlands and gives an outlook for the rest of the year. The unique hotel ownership database of Invast Hotels serves as a basis for the list of transactions.

Hotel market growth in the Netherlands

The number of hotel stays has risen, according to the Dutch Central Bureau of Statistics. More than 18.4 million hotel nights sold were reported till May 2017, a growth of nearly 7.9% compared with the same same period the year before. The hotel market throughout the Netherlands shows substantial growth as it benefits from the improved economic situation and the increase in the tourism sector. The hotel market growth can also be seen in the number of plans for hotel developments. In the first half of 2017, 88 (re)development plans were registered, of which  59 new developments and 28 renovation plans. The supply of hotels increases structurally throughout The Netherlands. Hotel chains expand and  new hotels developed are larger than average in terms of room capacity.

Low interest rates over the past years combined with an attractive hotel market, contributed to a significant activity in hotel real estate investments. The first six months the total transaction volume is already higher than € 519 million! For the full year 2016, the total transaction volume was € 482 million. Although the number of transactions is not the highest, the investment volume is already higher than previous year as recorded by the transaction research of Invast Hotels.

Responsible for this high transaction volume, is the single-asset deal in Amsterdam of the Doubletree Hilton Hotel for a total amount of € 356 million (€ 639.000, – per room). 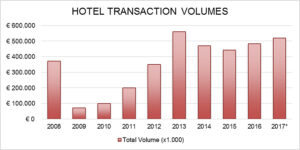 Interest rate levels and financial markets are expected to remain stable. Invast Hotels anticipates a further increase  in the transaction volume for the second half of this year. National and international demand for hotel investments in Amsterdam remains higher than in the rest of the Netherlands. However, due to limited supply in Amsterdam, hotel investment opportunities in other major cities in the Netherlands will become more attractive als alternative for Amsterdam located investments. 2017 is most likely to be the year in which the highest hotel transaction volume will be achieved for the last 10 years.

Menu
This website uses cookies to improve your experience. If you continue to use this site, you agree with it.
Ok